Of Grated Carrots And Canned Fruit

During a 'spirited' (no pun intended) debate with a supporter of the ACDC - I mean P, I suggested these "loving Christians" watch the documentary "For the Bible tells me so". For those who do not know, it is a documentary which exposes the motives and misinformation used by the religious right and biblical literalists to try and justify the persecution of GLBT people. It does not attack Christianity, but uses religious argument along with scientific facts to reveal the flaws and faults in the religious rights' attack on innocent people based on misinterpretation, mistranslation and prejudice.

People have been expressing hate under the guise of religious clothing for so long they do not even see the wrong in it anymore.

Brett of the ACDC - I mean P, had the following to say on the subject:

"You're fighting a losing battle Christina...your idea seems to be that we've never heard any of these arguments before and we have no answers to them...most of us have been there, done that got the T-Shirt. Don't assume...because...we all know that the truth comes from movies... :)"

It is my opinion that there is more truth in human suffering and misery than there is in a thousand pages of law and verse and beautiful imagery.

So as far as he's concerned, he's right and the argument about GLBT being rightfully persecuted is already settled? And he sees our battle as a losing one? He may be right - perhaps that is what spurs me on to fight even harder. And in the end, he and his friends may lose this war around gay rights because of their complacency and over-confidence - and misplaced faith in some fictitious hateful god that is in fact a loving deity who does not do their bidding as they seem to think - nor one who hates people just because they say he should.

For years these people have argued against GLBT, they deny science, they deny fact and they deny compassion and they completely ignore grace. They preach free will while acting to completely stifle it. They stubbornly refuse to believe that gay and trans people could ever be born as they are - and they still see us as the embodiment of "sin". And yet they somehow cannot equate the fact that according to their faith, nobody is without sin - yet they manage to see themselves as perfect and fit to judge and to persecute us.

They view the very idea that their God could create us as GLBT as insulting and blasphemous - they do not like it because it completely strips them of their self-assumed mantle of biblical authority and reveals them for the hateful liars they are. The truth is that religous controversy is the one and only weapon they have against us, and if their followers accept the truth, they will be completely disarmed. 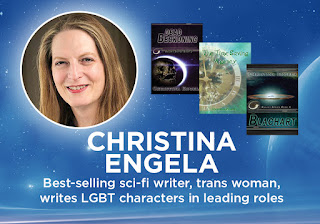 "Hey Brett, the documentary presents truth more compelling than any of the hateful things presented by some religious "experts" blinded by their determination to hate, to convince others to hate - and to do so in the name of a loving God.

Quite an interesting paradox, wouldn't you say?

Did you watch it? Hate is an ugly thing, isn't it? It tends to strip the TV glamor from those preachers and false prophets who are so full of hate you could use their blood to make bug spray. Perhaps that is what you don't like, I think - the revelation of the true nature of those who wrongfully hate other people, and because it strips them of their self-assumed Godly authority to do so.

I think what you're admitting here Brett, is that you have no answers that make sense."

Don't think that detered him, though. Facing a humiliation on the grounds of fact and evidence, he turned to finding fault with my character and approach. Somehow if he can make me look hateful it might in his mind turn me into and aggressor and justify those like him in "defending his faith" against an aggressive enemy. But I am not what he thinks.

"Yup, you got me Christina...that's what I was really saying...I have no answers that make any sense. Just a thought, I've noticed you use the word hate in quite a lot in your posts and sometimes your tone seems to resonate quite strongly towards that very direction. Is there any chance that there is hate/anger or something to that affect in you? Just a thought...
I remember I used to have a lot of anger inside me. It's really awesome to not have it hanging over me any more. To be able to love you without knowing you and even though you sometimes say careless things and assume a whole lot...and put words in my mouth - which really used to grate my carrot...so to speak :0)
Any way - if ever you feel you want to be set free from anything like anger etc - just about anyone in here can help you with that - just give us a holler and we will be stoked to help."

So in effect, his 'carrot' is being grated, and our 'fruit' is under threat of being canned.

"Hey Brett. Hate, huh? You mean like the hate your party expresses by declaring intent to turn me into a criminal, to take away my equality, civil rights, the right to marry and to prevent laws which protect me from hate crime? Or the hate preached from pulpits against people like me, blaming everything from drought to AIDS on us, turning us into outcasts and scapegoats. Would that be the hate you refer to?

I do not hate, Brett. I defend against hate. I am free, I think for myself and I have no regrets for my actions. And the one thing that does grate my carrot is people using Christ (who never said one word against GLBT) as an excuse to vent hate against innocent people in the name of a loving God.

Christ spent a lot of time with outcasts, and showed them love, not hate - what is your excuse?"

Anger? I think if Brett and his buddies had to hear day by day the things people such as the ACDP and CDA say about us, face the hate we face, the ridicule, the discrimination and prejudice - and the concern about self-righteous bigots bragging publicly about their intent to remove his rights and make him into a criminal, he would be pretty darn angry too. In fact, I'm sure he would be fairly pissed off. But, as I have been told before - it is better to be pissed off, than to be pissed on.

Yesterday for example, I heard a radio ad - and yes, I bore in mind that yesterday was April Fool's day - but this was genuine. On 5fm at 6:45, the Christian Democratic Alliance CDA in their election message stated that they are going to put their conservative policies in to the SA Constitution - removing all gay rights and equality - which they say (along with abortion) are the root causes for what they call "moral decline" and other problems facing "Christians" in SA today. They blamed this "moral decline" on gay rights - and the ANC and the DA - for including gay rights in the Constitution and called GLBT equal rights an "attack" on THEIR faith! They called the legal findings against the church in matters of discrimination an attack on Christianity - doubtlessly referring to the Moreletta Park case of last year when damages were awarded to a gay music teacher fired by the NG Church for being gay.

My, my, my. Some attack on Christianity. Apparently the Church is above the law in these people's minds - and can destroy lives at will, and woe betide anyone who dares to take them on about it. And if anyone who dares express a differing opinion - or dares to be honest is seen as a "threat to Christianity", then Christians should be asking themselves - and their leaders - some pretty pointed questions.


They made an appeal to all "true Christians" to support them in the coming election in order for them to oppress innocent people and to take away their rights.
I feel outraged by the insinuation that only "true" Christians would support such a backward and fascist mentality. I find this hurtful, I am insulted and angry - and worried about my future as a citizen in this country.
The religious right wing in SA is clearly and unashamedly using religion, particularly Christianity, as a political weapon against the gay, lesbian, bisexual and transgender (GLBT) citizens of SA.. By doing so, they are arrogantly claiming to own the 'franchise' of Christianity by claiming to speak for all "true Christians" in their condemnation of and attack on GLBT rights and dignity.
Frankly I am surprised that such a blatant call to incite hate against a minority group by placing undue blame on us for simply existing even made it onto the air! It is intimidation, plain and simple!
This is a clear application of religious rhetoric to turn gay people into a scapegoat and incite hate against them by urging people to support them in their self-declared war to deprive GLBT of equality before the law - and equal protection under the law. This is a clear breach of both the aforementioned Act, as well as the spirit of the SA Constitution, the IEC rules, and also of our basic human rights.
The law which addresses this matter is the Promotion of Equality and Prevention of Unfair Discrimination Act, 2000 (4 of 2000). It will be interesting to see how many answered the call to lodge complaints with the authorities about this slap in the face from people who have themselves forgotten to turn the other cheek. It will be even more interesting to see what will be done about it.

If anything.
Posted by Christina Engela at 12:08 AM