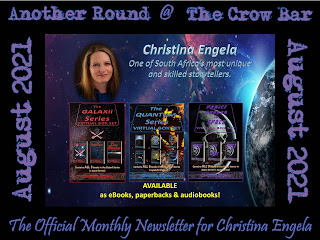 Posted by Christina Engela at 4:16 AM No comments:

About That Blank Check

A topical favorite of religious people, particularly conservative Christians, is so-called 'sexual immorality'. What is that exactly? To the rational mind, that would mean sexual-related activity which (so long as all participants are willing, consenting adults) results in harm to another person, or creature.

A system creates shame and then creates a means of absolving the shamed of their shame, provided they adhere to the rules of those who run the system. Convenient.
Read more »
Posted by Christina Engela at 3:34 AM No comments: 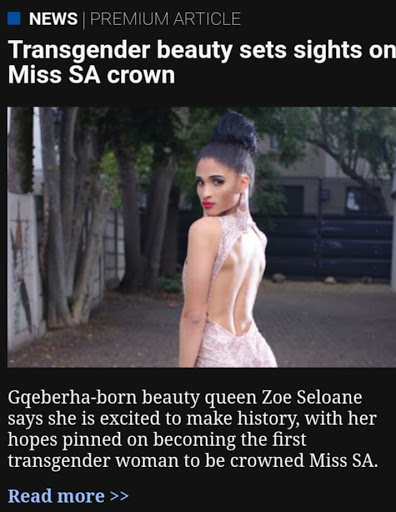 What really grated my carrot this week was part of the public reaction to the news that a transwoman had entered that archaic relic of the patriarchy which shamelessly puts women on show like cattle, the Miss South Africa contest!
It seems that as soon as things are nice and quiet and the bigots have stopped shouting for a little while, something happens to spark them off again - soon as they've more-or-less recovered from the disappointment that expressing racism and using the "k-word" in public gets people in trouble - the Karens come out screeching about how transgender people are somehow unfairly competing against them in x, y or z public domains and spaces, that "he-shes" don't belong in women's competitions (or in fact anywhere), and even that "god" created male and female, and apparently "doesn't make mistakes"!
This sort of idiotic Neanderthal mindset makes me bristle - so much so that it inspired my first LGBT activism-related article in quite some time!
So the news in question was that a local transwoman (a lady from PE called Zoe) is entering the Miss South Africa contest. It was in the Herald on Thursday morning, and by late afternoon every right wing lunatic bigot, transphobic halfwit and pious religious wanker who knows fuck-all about science, gender or what transwomen - and especially transwomen of color - endure in this country (or everywhere else) on a daily basis, started making an effort to vent their unintelligible hysterical bile in public.
Read more »
Posted by Christina Engela at 10:43 PM No comments:

Prisons Of The Future - In Sci-fi, Galaxii, & Their Relation To The Contemporary 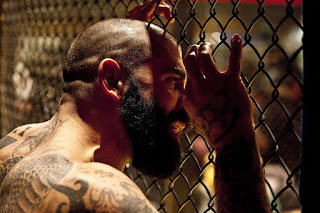 Modern prisons have by now been the setting for movies, books and series too numerous to mention. Some writers and movie makers have speculated about what form futuristic prisons might take - and they range from the ambitiously humanitarian and rehabilitative concepts of "Star Trek" and "Magnus, Robot Fighter", to the opposite extreme of positively brutal dystopian prison environments as seen in movies like "Fortress" and "Death Race" for example.

In this article (cross-posted from my author website) I'll be discussing the concepts of crime and punishment, and prison - in reality as well as in sci-fi settings - and the role of these in my own world-building in the Galaxii Series universe.

Read more »
Posted by Christina Engela at 8:15 AM No comments: 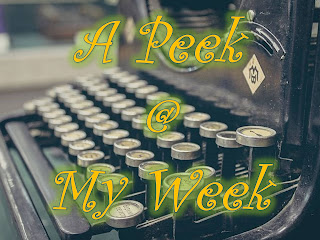 Time for another Peek @ My Week! :) What did I get up to? What's new, what's happening - and why do Americans laugh when I tell them my car has two hooters? 🤔

Posted by Christina Engela at 12:51 AM No comments: 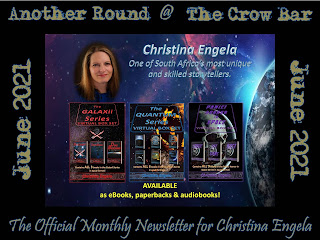 Posted by Christina Engela at 12:30 AM No comments:

Touching base with fans & friends! :)
Posted by Christina Engela at 11:53 PM No comments: 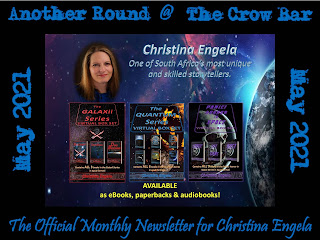 Here's my latest newsletter! News, upcoming releases & what I've been up to!

Posted by Christina Engela at 12:23 AM No comments: 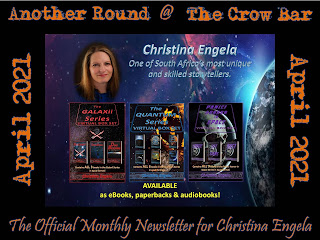 Catch me on social media!

If you’d like to send Christina Engela a question about her life as a writer or transactivist, please send an email via the Contact form.

or Buy Me A Coffee

Posted by Christina Engela at 11:13 PM No comments: 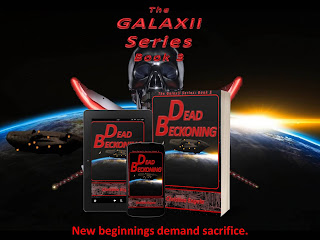 The fearsome Corsairs had waged a campaign of terror against the Human colonies for nearly a century, plundering and dominating the space lanes that crossed the Terran Empire, at will, all the while keeping the location of their base a closely guarded secret. Then one day, quite unexpectedly, the Corsairs luck finally ran out…

After nearly two days of fierce fighting, the Battle of Turtle Island left the skies of the Corsair world darkened with their dead. In orbit, the remnants of the once feared Black Fleet drifted, blazing… while below, the Corsair civilization breathed its last. The Terrans had finally defeated the dreaded Corsairs.
Read more »
Posted by Christina Engela at 12:33 AM No comments: