So Who Is Erroll Naidoo? 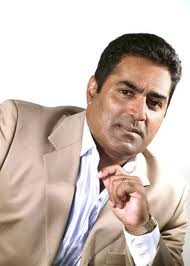 Over a number of days recently, I was engaged in an email debate with Errol Naidoo of the Family Policy Institute based in Cape Town. The reason for the debate? Mr Naidoo is leading an attack on Cape Town Tourism over its support for the Mother City Queer Project, and the use of a catch-phrase advertising Cape Town as "the Gay Capital of South Africa". Some of us wanted to inform him that he was being an ass and making human rights abusers out of himself and all those who support his call to target entities which he frequently accuses of "promoting the homosexual agenda".

In the course of this debate, Mr Naidoo played the card which has become expected of him - that is, he pretends to be nothing more than a "concerned citizen", a "pastor" and "faithful Christian" who is nobly "standing" for "Christian biblical values" while "doing the Lord's work". He says he doesn't hate gay people, in fact he says he has a good relationship with one gay man who has been his barber for 30 years, and whom he invites to family celebrations. Right.

At the same time, he has been using his own religious views to fight against the equality and civil rights of our community since the early 1990's, and is probably the most outspoken and visceral opponent of our human and civil rights in South Africa. Well, aside from that other guy on Facebook last year who claimed to be calling for the return of the death penalty because he was a Christian and believed gay people should die for their "sin". Wow, seri-haas. Not exactly good PR material, that one.

Read more »
Posted by Christina Engela at 1:26 AM No comments: