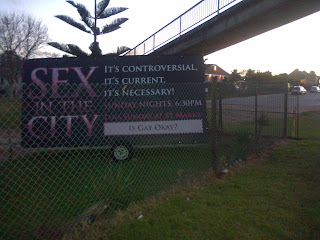 This past Monday I reported on the "Sex in the City" discussion which was advertised in the Weekend Post by St Marks Congregational church, being on the question "Is Gay Okay?" The elusive answer was buried among layers of propaganda and subterfuge, masked by verbose tap-dancing, foot-shuffling and showmanship - and turned out to be a somewhat muffled "no".

I'm not normally given to re-posting private conversations, but I thought that this occasion warranted it. First, to show that there were no ill-feelings between myself and St Marks - or at least, between myself and Reverend Claassen; and second, to show, post facto, that civil dialog had indeed taken place. The intensity - and to borrow a word from the good reverend - the conviction I felt while writing my response to him - and in writing this article, I felt, swayed me to post it here. I feel it reflects in my words, and I hope they penetrate - not just by getting through to the reverend - but to Christians, churches and their related groups everywhere which continue to separate and to isolate and denigrate people based on a self-defined need to be "right", judgmental and self-righteous - and where this results in hardship, cruelty and harm to others.

In the article - and via emails to them, I extended an invitation to St Marks and also to the members of the participating panel to join in a discussion in order to give the other side of the conversation - the side of the conversation which was left out, omitted from the discussion last Sunday evening. I received the following reply from one of the panel members, Rev Kenneth Claassen. My response to him follows below that.

It appears from the response I received, that this missing, silenced side of the discussion will remain omitted.

The irony of this entire issue - the world over, and not just here in Port Elizabeth - is that people who run churches think that they run a religion and own the franchise. While they may carry titles such as "reverend" (whether they act in a reverend manner or not) or claim what they like about the religion, or interpret its writings to suit the state of their own spiritual conditions - or even try to speak for it along with all other people who identify with that religion - they only espouse their own views. It is up to other people to agree or to disagree with them, and with that which they say or do.

It is the agreement of people - ordinary people who fail to question and fail to speak up, that gives such individuals influence and power - and power to batter and bully those who don't "fit in" or conform to their ideas of perfection or "righteousness", to pieces. It is the lack of resistance to messages of bullying, hate, intolerance and persecution which sullies the reputation of a whole religion and all its followers, and which marks them as abusers, persecutors - and which turns other people into scapegoats, victims, casualties and statistics.

I don't begrudge people the right to believe whatever they want to believe, but I do oppose their insistence on trying to enforce their beliefs on them - and especially, MOST especially when it results or entails harm. I don't mind if a person doesn't like me because he or she holds a certain view of me based on their religious interpretations - whatever their religion. After all, I am not so needy and wanting that I will break down and cry because so-and-so doesn't want to sit next to me on the bus or thinks he's got room to look down on me and treat me like a leper - but I DO mind if that person acts in real measurable ways against my right to live my life to the same legal standard of equality, freedom and dignity as they expect for themselves. It is arrogant and prideful for people of a particular demographic to speak for an entire religion while placing their own demographic within that religion above all the rest that identify with the same religion, and to work to exclude them, to isolate and ultimately destroy them.

With respect, if the Christian God and his Jesus exist, and for Christians, they do - then their covenant is with that God and their Christ - and not with people who arrogantly place themselves on a throne and appoint themselves as an intermediary between them. Not Reverend Kenneth Claassen - nor St Marks, nor the Congregational church, nor the entire collective of Christian churches in the world can cancel or revoke the "membership card" of anyone who chooses to identify as a Christian, or decide for them where they will spend their afterlife. They can stop people from entering their property, from joining their exclusive club, and from speaking in their venues. They can spread false information, twist the facts to suit them, and bully people in their walls, halls and communities with their self-appointed authority - but they cannot dictate to anyone what is or is not Christian - or decide for someone if they are or aren't a Christian. If they could, then there would not be as many as 41,000 Christian denominations who don't agree on the same things that define Christianity or the practice of it. There would only be one.

They have in them so much power to do good - if only they would make the choice to.