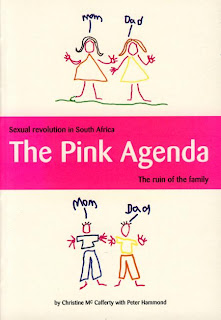 I read this item a number of years ago. Twice. Seeing it listed on Goodreads.com made me see red, and prompted me to write a review on it.

The lies and hatred contained within it's pages made me so angry that I had to keep putting it down and take regular breaks to avoid ripping this disgusting item into itty-bitty pieces and burning each one while singing something energetic involving a lot of hand-actions and expletives.

It is possible that this book contributed towards my eventual turning my back on Christian religion. In that case, I would call this book "life-changing" - but certainly not in a good way.

Time has moved on in South Africa since this book made headlines, but it is still available, and still advertised, and still doing the rounds. I didn't buy the copy I read - since there was no way I was going to help fund the haters who wrote it, but was given it by a friend who worked at a local church some years back. I had noticed it on the floor beside a shelf in her office and pointed it out. She very kindly gave it to me, saying some chap had dropped it off for them when it first came out - nigh on 20 years ago now! She had never read it, she said, but thought the cover looked "kinda cute". LOL. Little did she know, I suspect, what was lying in wait between those covers!

The book draws almost entirely on the alleged "research" and purported "studies" and thumb-sucked "statistics" provided by discredited and banned former American psychologist Paul Cameron (listed in the references & sources section) who had more than once recommended the extermination of gay people (including to President Reagan in 1985) and who has been consistently condemned and dismissed and even warned against by his peers for unethical and suspect methodology in his *cough* research which "proves" that "gay people live shorter lives", "spread disease" - and well, 99% of the crap spouted in this book.

Despite this, one of the authors was quoted here in 2001 (at the time this thing was unleashed on an unsuspecting public) on the matter of the book being almost banned by the Film and Publications Board saying: "”It is ridiculous!” author Christine McCafferty told Culture & Family Report. “Note how medical facts are described as “too graphic”! Of course, we will appeal the ruling to the board, and then to the courts.” The Pink Agenda contains an impressive array of the latest medical information regarding homosexual practices, discusses the impact of laws and cultural trends, and includes a Christian outreach to homosexuals. This writer reviewed the book before publication and wrote a book-jacket endorsement: The Pink Agenda is one of the most readable and comprehensive books ever written on the challenge that homosexuality poses to society and to its own practitioners. Before public officials approve any more “gay” affirming laws, they need to read this. The sections on health risks alone would give anyone pause before promoting homosexual behavior as a “civil right.” “We have tried to convey a message of love while telling the truth about homosexuality,” McCafferty said in an e-mail.”"

"Medical facts"?? "Christian outreach"?? "Love"?? Let's not even go there! Building a book of hate while using references like Paul Cameron (and even Scott Lively for that matter) as the foundation of your "Christian OUTREACH" and then speaking of love? Seriously? I'd shudder to see what they would come up with if they actually admitted to their hateful intentions!

In terms of creativity, this work is not even original in its precept, since it is not the first such hateful piece of propaganda of this type. In fact, I found this item to be little less than a revised and localized take on a string of earlier similar projects from the USA ("Homosexuality: A Freedom too Far" (Charles W. Socarides, 1995) Also incidentally President of the National Association for Research and Therapy of Homosexuality (NARTH). "The Homosexual Agenda: How the Gay Lobby Is Targeting America's Children" (Americans For Truth About Homosexuality, 1997) etc.) updated and modified to suit a conservative South African audience. Even today, charlatans in the religion industry (yes, industry) are still producing unoriginal books built on recycled clap-trap such as this and repackaging it as "ground-breaking" and "truth" and using it to destroy innocent lives around the world. Attempts to counter this propaganda is still - as it was then, painted to look like this: "Our book shows how homosexual activists constantly attempt to ban and censor anything that disagrees with their view on homosexuality or anyone who attempts to stop the promotion of homosexuality in society. When they call for 'freedom,' it is only "freedom for their own agenda."

The authors of "the Pink Agenda" perpetually twist facts, distort research, and misrepresent the many issues facing LGBTI people the world over, and especially in South Africa. People are reduced in stature to nothing more than acts of sexual gratification, and their humanity and self-worth denigrated to being portrayed as a dangerous threat, and an enemy that must be fought to the bitter end. I was utterly sickened.

Were this even a work of fiction, I might feel less so - but the worst part is that these people are serious - absolutely, genuinely serious, and totally convinced of every single lie contained within this torturous tome. It is no wonder that when this work was almost (regrettably) banned in South Africa, it was described as "The book, quite simply, is a work of pure hatred and will contribute to fostering of homophobic attitudes in South Africa" and "The committee was concerned that the book has made assertions that are questionable to say the least, and the (authors') leap from homosexuality to criminal conduct is... completely without justification," a Film and Publications board spokesperson said at the time.

Having read it, I see this piece as a disturbing example of inhumanity and xenophobia given form in the name of 2-dimensional prejudice and disproved pseudo-science masquerading as "credible fact" written by two narrow-minded haters (McCafferty and Hammond) masquerading as Christians peddling this hateful rubbish with zero basis in fact as authoritatively as "Christian reading material".

This book is unquestionably the most hateful load of poorly researched, fraudulent, hate-inciting, misleading and abusive tripe I have ever had the misfortune of reading.

I wouldn't recommend this garbage to anyone.