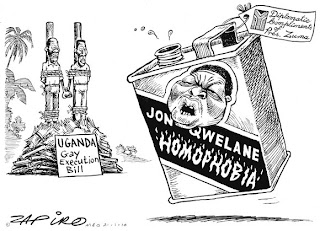 I sincerely hope Mr Shapiro doesn't mind my including his brilliant cartoon of the issue with my article, it is remarkably apt and fitting to the situation, it puts in one picture all the words I could write a hundred articles about this subject! Kudos to him!

Last week, the storm around the appointment of the homophobic News24 columnist Jon Qwelane broke mainstream news. Immediately, there was an outcry by human rights organizations, specifically from the Pink Community, even resulting in some advocacy bodies in other countries lodging objections. Why did they object?

Well, because Mr Qwelane has made a habit of targeting groups of people in his articles, derogating them and using his articles as a forum to incite distrust and even hatred against them. Although he is known for his intolerance of women equality, and racist sentiments against White people, his particular favorite appears to be gay people.

Thus far, the only official response by the ANC has been a rather shamefully ignorant statement made by its spokesperson, Jackson Mthembu, who is reported to have asked a reporter for the Mail & Guardian:

"Do you have any scientific evidence that [Qwelane] is a homophobe?"

I have to wonder if this man understands or is aware of the reasonable and clear definition of homophobia? Should I define homophobia as a measure? No, let's go there. Here it is, from Wikipedia: If you are unsure of what a homophobe is, please read it and familiarize yourself with it.

"Homophobia is a term for a range of negative attitudes and feelings towards homosexuality and people identified or perceived as being homosexual. Definitions[1][2][3] of the term refer variably to antipathy, contempt, prejudice, aversion, and (irrational) fear. Homophobia is observable in critical and hostile behavior such as discrimination[1][2] and violence on the basis of a non-heterosexual orientation. In a 1998 address, author, activist, and civil rights leader Coretta Scott King stated that "Homophobia is like racism and anti-Semitism and other forms of bigotry in that it seeks to dehumanize a large group of people, to deny their humanity, their dignity and personhood."[4]

Two words originate from homophobia: homophobic (adj.) and homophobe (n.), the latter word being a label for a person who displays homophobia or is thought to do so."

Now look at Mr Qwelane's portfolio - all the articles in which he has undermined the constitution, attacked gay rights, and belittled the pink community - most specifically his article from 2008 "Call me names but gay is not ok", which is considered a still-stinging slap in the face to us. If anything, this appointment is a resounding backhand which compounds this insult as prejudice, injustice and inequality thumbs it's nose at us.

There is your "scientific proof" of his homophobia, Mr Mthembu. The definition, and the evidence in the perpetrator's own hand. The bullet and the smoking gun. In fact, perhaps there should be a picture of him beside the definition.

Jon Qwelane clearly does not even respect South Africa's own constitution, which is why he can make careless and irresponsible calls for "politicians with balls" to rise up and change it to remove the human and civil rights of the Pink Community from it.

How can this country, knowing the state of current events in Uganda, send him as an Ambassador to that country, which is overrun with homophobia - if he clearly does not even respect human rights?

Perhaps the reason Mr Qwelane and other homophobes seem to not care about their homophobic attitudes, is because they haven't bothered to read the definition - if they had, they might note the striking similarities to another rather nasty word in the dictionary - being "racist".