"Loderunner" - Why Did I Write It? 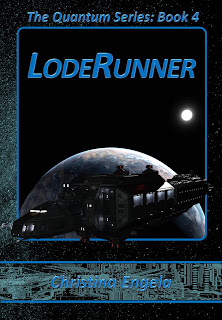 "Loderunner" is book 4 in my Quantum Series, and I completed the first draft in 2007. The background of the story and why I wrote it is something I've never gone into at length before, so for those of you who are interested, this might be worth your while reading.

Back in the early 2000's I met a colleague at work who I became friends with. Her name was Kathryn, and after a little while, we discovered that we were distant cousins on my father's side, the Engela's. Kathryn's initials were KAE, and so like all her friends, I called her "Kae" - much to her traditionalist parents disapproval. Kae was a divorcee, who had a 12 year old son called Michael and the two of them were very close, very much as I was with my own mother. I visited them often, usually on Sundays, and sometimes in the week as well - we were very good friends.

Kae enjoyed reading my stories, and very often, she was a sounding board for my quirky writing - and we shared a warped sense of humor! One day, Kae suggested I create a board game... that's right, a board game - for her to play with Michael. I put a lot of thought into it - after all, I'd played board games before, but I'd never invented one! The result was something I called Loderunner, with "action cards" dictating the outcome of the game for competing loderunner (space freighter) skippers traveling across a starscape board riddled with various stations, adventures and stops. The action cards had funny instructions like "Your crew eaten by space monster, miss a turn" on them. It never got further than that though, and I later on thought I might use it as a basis for a story. I did, and that story turned out to be "Loderunner".

If you've read "Loderunner", you'll see I dedicated it to Kae and Michael - both for inspiring the idea, and in memoriam. My friend Kae died in 2012 from complications after heart surgery, and her son Michael to years later on the surgeon's table at the tender age of 18, from sepsis resulting from a burst appendix. Neither of them never saw the finished story.

"Loderunner" is set after the third book ("Dead Man’s Hammer") and introduces new characters and a whole new adventure starting on the quirky and by now familiar third-rate Terran colony world of Deanna.

Leading characters the reader may be familiar with from previous titles, such as Gary Beck, are reduced to playing cameo and supporting roles in "Loderunner". The lead in this story is a struggling private investigator by the unusual name of Timaset Skooch, who at the start of the story wins a small pile of loot …in a game of Uno. Part of the pot turns out to be a decrepit old cargo space ship (loderunner) called the Celeste (any alarm bells going off yet?) which Skooch decides to take out on a voyage with its eccentric and dysfunctional crew across the remotest reaches of Terran space to seek their fortune in the ultimate get-rich-quick scheme.

One of the spanners thrown into the spokes of the wheels of this plan is Skooch’s other half – Dory, who is a complex character in her own right. Dory is transgender, in the early stages of transitioning between male and female, and Timaset Skooch (who had never thought he may not have been entirely heterosexual before meeting Dory in drag on a bender one heavy night at a local night club called "the Slipped Disk") is understandably confused. The realization that Dory is transgender and that this would mean realigning himself yet again, seems a rather daunting prospect, especially with the headache he still had from getting mugged. Meanwhile, his other half – while supportive and dedicated to their continued partnership – is quite resolute about transitioning. It is on this note that Skooch and the odd-ball crew of the Celeste set off on their – er, oddysey.

It has been noted before that the transgender theme is a dominant theme of this story - and perhaps more so than in previous stories in the series. The Quantum Series is dotted with transgender characters - Cindy-Mei Winter, Danielle Grauffis, and now Dory Wintermuller and Jaymie Vallantdorf in "Loderunner". I don't feel the transgender theme detracts from the story at all, and in my opinion, I think it enriches it - while also broadening the reader's knowledge about people around them. Considering that today, in 2018, the number of transgender people being murdered globally in transphobic hate crimes having escalated dramatically since 2016, a single book that focuses on the desire of transgender people to exist in an equal, protected state of safety and for acceptance from their friends and family, is not unreasonable. My own gender confirmation surgeries took place between 2004 and 2006, so admittedly, my own transition was foremost in my mind at the time I wrote and edited this story (2007).

Following the rather dark tone of the previous title "Dead Man's Hammer", "Loderunner" offers the reader a much lighter, more humorous read, in fact I feel rather proud of it, and I think it may well be one of my funnier, entertaining books.

Transporting livestock turns out to be enough to make a living, although not enough for Timaset and his compatriots to get rich off. On the plus side, they get to sight-see and visit destinations such as the Rings of Jupiter (don’t ask) and get a closer look at Mars, one of Earth’s oldest and most advanced colonies, as well as Pluto, where the Celeste stops over briefly to drop off a couple of soldiers at the local military outpost after a bender while on furlough. The top of the list however has to be the abandoned ship they encounter in the depths of empty space, where there is no such thing as a free lunch – except of course, if you happen to be a xenomorph guarding a long-lost pirate treasure…

Far from being simply a tale of incidental adventure and comedy used as a front for activism into which I rather cunningly injected a narrative about transgender issues, "Loderunner" is very entertaining, complex and funny.