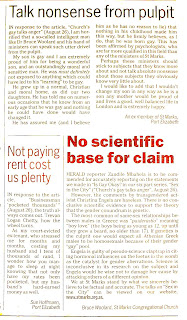 Instead, he has dismissed the findings of respected researchers in the medical field as "claptrap" in favor of persecuting LGBT people on the merit of his own apparent "medical expertise" - or that of his colleague who was a medical student once, apparently.

That, Dr Woolard, is a demonstration of pseudo-science - twisting the name of science to suit your own prejudice, in an attempt to lend it some standing - but with no basis in fact.


Aside from the lack of support for the argument Woolard mounts - he seems to have forgotten entirely the important part of the debate HE started - compassion. How does he expect to be perceived as "compassionate" if he so vehemently denies that LGBT people have any legitimacy to exist as LGBT people at all - and does so from a position of prejudice and a stubborn openly hostile refusal to accept scientific or medical facts? Further, I admire the response from "An ex member of St Marks" - kudos to you ma'm! You said it all - any response of mine is just superfluous! If only more parents - and more Christians, were like you.

[This item is number three in a series of articles in the continuing saga of misrepresentation of fact and the silencing of any opposing voices by clerics of the St Marks Congregational Church in Port Elizabeth.]
Article 1, Read Between The Lies
Article 2. St Marks Is Gay Okay Rebuttal
You can view the video I took here: https://youtu.be/00-u-tJwh-o

A list of accredited researchers and studies conducted by universities in the UK, Sweden and around the world which offer compelling evidence that sexual orientation, gender and gender identity are biologically determined, is available here.

Particularly worthy of mention is the series of studies conducted by Dr Qazi Rahman, assistant professor in Cognitive Biology from Queen Mary University London. There is also a list of older similar studies conducted by other scientists around the world, who produced similar, if not supporting results.

Of high importance is mention of the infamous Masters & Johnson fraud of 1978, in which a book written by two conservative psychologists claimed that gay people could be "counselled straight", giving alleged case-studies as examples. The book went on to form the foundation of the so-called "ex-gay" movement, branches of which can be found even in South Africa - and in conservative homophobic churches who adopt their approach to instilling shame and guilt in their victims. "In his groundbreaking new book, “Masters of Sex”, author Thomas Maier discovered through investigative reporting that the results of Masters & Johnson’s study were entirely fabricated. Virginia Johnson acknowledged that the results were fake. She had actually argued in 1978 that book should never have seen the light of day – but it was already to late in the publishing process to undo the damage. One can not overstate the importance of Maier’s findings. They undo the very underpinnings of the so-called “ex-gay” therapy movement, further showing that there is no scientific evidence or data to support the outdated idea that gay people can become heterosexual through therapy. Indeed, many people who have undergone such “treatment” claim the experience was harmful and that they were psychologically damaged. The American Psychiatric Association says that attempts to change sexual orientation can lead to “anxiety, depression and self-destructive behavior.”

A list of accredited bodies, researchers and academics, and also studies and material which conclusively debunk Dr Woolard's claims, and the claims made so matter-of-factly by his "panel of experts" at the St Marks "Is Gay Okay?" debate, is available on the same page linked to above. Some are mentioned below:

Of particular note is the study by the University of Texas School of Social Work, which completely rubbishes claims that children raised in same-sex adult/parent homes suffer emotional trauma, mental retardation or any kind of disadvantage - or even turn out to be gay themselves.

The conclusion of the American Academy of Pediatrics in 2001 was that lesbian and gay parents are as competent as heterosexual parents. The study did note some differences between families with gay and lesbian parents and those with heterosexual parents, but was careful to emphasize that these were differences, not deficits. Of special note, the lead researcher Dr Judith Stacey remarked: “There is not a single, respectable social scientist conducting and publishing research in this area today who claims that gay and lesbian parents harm children.”

Oh - and, although Cameron's claims to be a "serious academic" who is referred to by right wing hate groups around the world as an "expert" on homosexuality, the actual scientific community refers to Cameron’s “studies” as “essentially a waste of paper”.