Come To The Dark Side - We Have Cookies Too 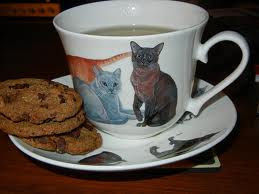 Christians - you just can't seem to win with them.

If you're gay and a Christian (horror of horrors), they want to cut up your membership card and deny that you are part of their club (or ever were), and when you abandon their faith or even go so far as to change religions and want nothing more to do with them, they still persecute you because you have somehow "proved them right" - and then they see you as an even bigger "threat" to their paranoiac little "worldview".

Many Christians automatically assume everyone else is a Christian too, or if they aren't, should be - which is why I often receive these annoying spam chain letters filled with snarky comments about Muslims or other faiths - or about us dirty rotten trannies and queers who just don't seem to get the message. God has got our number and will be coming round to punish us for our "sinful lifestyle choice" - oh yes, and presumably to pat them on the head for a job well done. And quite often, these people do not realize the harm they do to their own image and their own cause - take for example the following:

The world is always ending, the sky is always falling, and there are always "signs of the end times". I am seriously looking forward to the 22nd May 2011 - because I am going to taunt every fundamentalist half-wit who sent me a chain letter about the end of the world being nigh on the 21st with: "Hey guess what, the world didn't end yesterday - don't we feel stooopiiid?" LMAO. Just like the other twenty-odd dates I've heard of in the past few years. What happened? Was it postponed? Cancelled due to poor attendance? Why didn't I get the memo? LOL. Now, ahem - before someone runs off to report me for being a "Christophobe" (that one was specially for "Dr" Peter Hammond of the FF and CAN conglomerate whose wonderful book exposed our cunning plan to take over the world), let me move on to my point.

Many Christians are very tolerant and loving people. I know they exist, because I know some of them personally. In fact, some of my family falls under that description. Most of them though don't even have a clue about what is going on around them, and sad to say, when authority figures in the Christian Church foam at the mouth in their pulpits about us dirty, unhygienic and perverted Pink folks who dare to love people regardless of gender, or who even go so far as to "mutilate our bodies", they just shake their heads, head off for coffee and cake afterwards, talk about work, the kids and politics, and then carry on minding their own business. They still speak to me as a friend, and they refuse to condemn me for who and what I am. But unfortunately, they also don't speak out or stand up to the bullies who stand up front pretending to speak the truth and also pretending to speak "under the anointing" as the charismatic evangelical saying goes. Which means, aside perhaps from a few nice conversations over tea and cookies with these friends of mine, most of them are not of much good to me.

What do I mean? While I appreciate their friendship and their honesty, I know for certain that should I ever hear the trump of boots at my door in the wee hours one morning, if one day "they" ever come for me, I certainly doubt they will even publicly admit to knowing me, let alone lift a finger to help. You see, I think that while they are far more close to the originator of their religion, the Christ they all speak of - but only a few honor - they are lukewarm Christians as in everything else as well. Be that as it may, it is the others I fear we need to watch out for - the fundamentalists.

Yes, the fundamentalists - those folks who swallow a dose of hate every time they read a passage of their holy book, looking keenly between the lines for the bits where the same Christ who reportedly never condemned anyone to death, actually meant to. The empty spaces between the lines are filled with things ordinary folk don't know about - where things God meant to say or thought - or said to them in their private moments of coherence, are written - presumably in invisible ink. Things that inspire them to act as if they are the right hand of their God, sent out to strangle the freedom out of the world to make the choices which their book says their god gives us all - in order to take away that choice completely.

Why do I mention the death sentence? Why, because there are some folks in every Christian community in South Africa that believe the death penalty will sort out all their problems - and especially for that troublesome "gay" problem. You know it's true - how many of these radicals are also ardent supporters of the pro-gun lobby both locally as well as internationally? Do you even know who your pastor is who is up there laying down the law and giving you the "good news"? Or do you just sit there and follow blindly, swallowing everything as if you have a funnel stuck between your jaws?

There are even folks in this country who belong to a few political parties supposedly representing "all Christians" in South Africa who argue that way. They want gay and trans people "punished" for being gay or trans - and for not "listening" to them. Just up the road in Uganda, for the past three years, there has been a serious attempt to do just that - kill all the Pink people in that country just because they live life in a slightly different shade of human. And while you might be thinking that this is just politics, let me ask you if you ever stopped to wonder if people who argue so hatefully against us Pink folks ever use medical or scientific proof to demonstrate their point? Or if you look closely, do they demonstrate a keen religious - and definite fundamentalist undercurrent - in their arguments?

Does any of the so-called evidence and "studies" they present as they did in Uganda for instance, where they still believe that gay people recruit children in schools, and people can become gay just by looking at one, stand up in the light of serious inspection? Do you even know? Well I'll tell you - no, it doesn't. It's propaganda, twisted by openly religious fundamentalist stooges wishing to destroy the lives of people they don't want to grant the right to live in peace beside them, on purely religious grounds. And take a look at the most vocal people in the tragedy on the Ugandan stage these past three years - they are Bishops, Reverends, Priests, Pastors, foreign evangelists, government ministers who are also religious officials or champions of the Ugandan genocide bill. If one day this tug-of-war ends and the Bill passes and the Ugandan government begins to slaughter it's Pink Community, it will not just be a human tragedy that could have been avoided, but it will be a genocide fueled by religious fundamentalist Christianity.

The irony is, these fundamentalist Christians feel the same way about people of other religions, they grant no-one else the peace to share the world with them because they see everyone else as enemies and competitors, and an insult to their beliefs and way of life - which fits neatly into a space big enough only to hold their holy book, and no more.

Trouble is, every other group they hate has guns, countries and the ability to defend themselves - we Pink folk don't. We live among you, in every place on Earth. They pretty much run the governments, churches and society and hold privileges which come with being a social majority - which include typically, the "right" to keep out minorities they don't approve of. We have no country to care for our interests, no armed forces to deter or cool the viciousness of their attack. We can be born anywhere, into any family, to other gay or trans people - or to the most religious and worshiped evangelical pastor in the world - and what we are is by nature - and nature is a notorious lover of irony.

And when I know that there are political parties in this country only too keen to mix politics with religion, and in most cases solely to attract votes from the fundamentalists, it worries me. Mostly though it is all smoke and mirrors, just a ruse to attract votes - but in a few frighteningly fanatical cases, it is a genuine expression of a dark and deep-rooted desire to take over the world South Africa and to bed and bend us all to its will.

Where is all this going to? I have to wonder. But I suppose none of it frightens me as much as the astonishing silence from the other Christians - almost forgotten, those who sit silently in the pews, listening to the ranting and hate mongering, saying nothing and giving consent to folks who belong more in an episode of Pinky and the Brain than in a pulpit of a church supposedly founded on sacrifice and the undying love of a creator-god for its children - or in a government acting in their name.