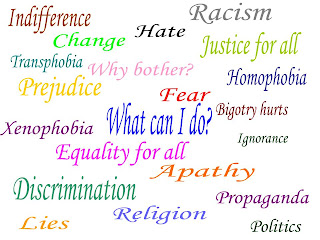 What are we in this world? Agents of change? Do we make things better, or worse? Or do we sit back and moan all day, doing nothing constructive and even worse, leaving the world unchanged and no better for our passing? We could go even lower by referring to our friend IdiOT Amin's "bloody agent", but I'm sure we can do better than that. So could he.

In South Africa we don't seem to have GLB groups leaving the T and I out - or discriminating, or abandoning us like in the USA and ENDA matter. The UK has "Stonewall UK" - a group that does a good job fighting for gay and lesbian rights - but that has solidly turned its back on the transgender and intersex communities, and occasionally even helped to attack them. Luckily we haven't seen this deplorable behavior here. Transphobia from the straight bigots in our society, yes. There is still plenty of that, but then, isn't there everywhere?

GLBTI is an acronym. Some use LGBT - and some sit on the sidelines and pick at the way people use these acronyms. It's so hard to please everyone and to keep everybody happy. People get annoyed by the order of the letters, people get pissed off because their letters are left out, or some other letter they don't like gets added in. If you're thinking how childish this sounds, you're not alone.

Should the gays get upset about who gets listed first? Should the Intersex be pissed off every time they don't get listed? Should we start using something like LGGBQPTA2XYZ etc? When kids come out they can say: "Mom, Dad, I'm alphabet soup"? Why should we care about the sequence if we are all supposed to be equal - or do the nit-pickers really want their letter to be more equal than the rest? Why do you think I prefer to use 'Pink Community'? No list, no acronym - no favorites - and it includes everyone. Some people have even accused me of abandoning transgender rights in favor of the gay community - I have even been accused of being a "traitor" LOL. By now I have learned to take it from whom it comes.

Once again why I prefer using "Pink Community", because it includes EVERYONE not hetero or cis-gender and is a hell of a lot easier to remember, pronounce and type or write than LGBTIQQ2AP etc, etc. Acronyms like that, while useful in extremely technical cases are otherwise a royal pain in the arse for activists and people who actually have use them every other sentence - which is probably why so many of them settle for using "gay" when they mean everyone in the PINK COMMUNITY. I challenge you to think of a better term that includes everyone, without it being some bloody ridiculous and annoying acronym that inevitably leaves SOMEONE out.

Yes, there are groups out there - and activists too - who only worry about their own little sub groups and letters within the acronym. But not me. Some groups completely ignore trans and intersex issues and the communities that go with them - despite the great big hugely obvious mountain of common sense staring them in the eye that shows how many of our trans or intersex (or any of the other letters tacked on) rights can be included and addressed within the scope of the work they do to fight for their own rights. Aside from the compassion and solidarity this would represent, think of how many more voices this would add to the cause of our human rights globally. More voices, more votes, more say. Need I elaborate? And while it may sometimes seem to my trans family that I am only fighting for gay rights, I fight for trans rights too - through my fight for gay rights - and I fight as hard for all our rights as if they were all for me.

So there are groups out there that leave us out. That's a challenge, and a disgrace. And an exercise in irony and hypocrisy for times to come. But how will things ever change if we just sit there in despair and hopelessness and say "they don't want to play ball with us"? Funny, how as a transwoman I am heavily involved in two SA pink community groups (and even president of one and on the executive of the other) - and also involved with several foreign GLBTI groups...

So wherever you are, there may be groups that aren't inclusive of everyone, inclusive of your group? So what do you intend doing about it? Yes, you.

Stop being an armchair critic and talk to your friends in the other groups - you do have friends in the other groups, don't you? Get involved with an advocacy group and be a trans voice within it. Educate them about who we are and how similar our needs are to theirs. Mostly these groups will realize their mistake and open up to you, but if they won't hear you, shout louder - or start your own group - and include everybody. Don't play tit-for-tat and repeat their mistakes and return their hostility in kind. Stop drawing battle lines between us and our allies.

Because outside this alphabet-soup minority group of ours, there are loads of people who will happily call us all "gay" and hate us regardless of however we see ourselves or how we feel about each other. And fighting in a burning house makes about as much sense as a caucus race and a white rabbit being late for anything.

There are lots of ways and idioms to describe this, such as "two wrongs don't make a right", but my all time favorite is a quote by Gandhi, who said: "Be the change you want to see in the world."

So what are you in this world?